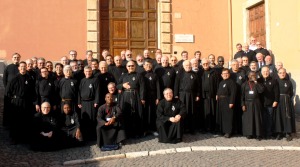 In the eighteenth century, a great Italian saint, Paolo Francesco Danei – now known as St Paul of the Cross – was captivated by the love of God shown in the Passion of Jesus. This gift of the Spirit drew Paul into the heart of the Gospel, and called him to a life of intense contemplative prayer and dynamic apostolic activity. He gathered companions who felt the same call and together they began to live “a life like the apostles”.

The first name he gave his community was “The Poor of Jesus”. This was to indicate that their lives were to be based on evangelical poverty. Eventually they became known as the Passionists, the religious congregation that today, in sixty countries throughout the world, continues the mission “to keep alive the memory of the Passion of Christ”. Today the priests and brothers of the Passionist Congregation devote their lives to spreading the message of God’s love shown on the Cross. Thus they continue their founder’s ministry of bringing others to a loving experience of the living God, who reveals himself through the suffering and death of Jesus his Son, who gave his life for our sakes and left us “an example that we should follow in his steps” (1 Pet 2:21).