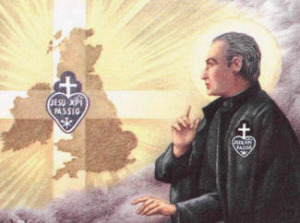 Saint Paul of the Cross lived all his life in Italy, but he always had a special interest in “England and the neighbouring kingdoms” and he prayed continuously for these lands. His desire to see his community established there came to pass in 1841 when Father (now Blessed) Dominic Barberi established a Passionist community at Stone in Staffordshire. Fr Dominic brought the ministry of the Passionists to Ireland in 1848. He preached the first Passionist Mission in Dublin at Saint Audeon’s, High Street together with Father Ignatius Spencer and his early companions. Fr Ignatius preached the first Passionist Mission in Scotland at Saint Andrew’s, Glasgow, in 1850.

The first Passionist monasteries (or ‘Retreats’ as the Founder called them) in Ireland and Scotland were opened at Mount Argus, Dublin in 1856 and at Saint Mungo’s, Glasgow in 1865. Other communities were soon set up across the two countries as well as in England and Wales. In the 1970s the Province took over responsibility for the English speaking parish in Paris at St Joseph’s, avenue Hoche, which the Passionists had founded in 1863.

In 1952, the Province took on responsibility for the missionary Church in Bechuanaland (now Botswana), and soon developed in South Africa as well. More recently, houses were also opened in Zambia. Today, the Passionists in southern Africa  form the Vice-Province of Our Lady, Mother of Africa.