BLESSED NICEFORO DIEZ TEJERINA AND THE PASSIONIST MARTYRS OF DAIMIEL

Blessed Niceforo of Jesus and Mary 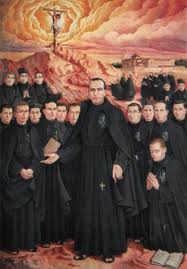 (Diez Tejerina) and his 25 martyr companions were all members of the Passionist Community of Daimiel. Their martyrdom took place against the background of the strong anti-clerical climate which was sweeping Spain after the proclamation of the Republic in 1931. The majority were young religious aged between 18 and 21 years of age studying for the Priesthood and the possibility of working one day as missionaries in South America. Towards midnight of 21/22 July anticipating the possibility of being attacked, the members of the Community, led by the Provincial Fr. Niceforo Diez gathered in the Chapel of the Monastery. They made their last Confession, received Holy Communion and heard the Provincial say ‘Inhabitants of Calvary, this is our Gethsemane. Human nature frightened at the prospect of the Steps of the Passion, the same as that of Jesus, grows weak and is intimidated. But Jesus is with us. He comforts us and sustains us. In a few moments we will be with Christ. Inhabitants of Calvary – Courage! Let us die for Christ.’

Not one abandoned the group to avoid participation in their fate. The moment of supreme sacrifice had come and all of them faced death with unflinching fortitude and patience for the love of God and Jesus. In actual fact even the soldiers admitted that some of them died with the crucifix in their hands and crying out ‘May Christ the King Live!’

Their Memorial is observed on 24 July, the available date nearest to the date on which the first group, under the leadership of their Provincial, Blessed Niceforo Tejerina, was martyred. They are the first Beatified Martyrs of the Congregation of the Passion. Pope John Paul II beatified them on 1 October 1989.