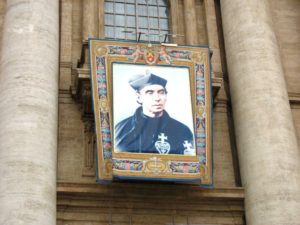 A large crowd joined Archbishop Diarmuid Martin at Mount Argus on Sunday, 4 June, to mark the tenth anniversary of the canonisation of Saint Charles. In his homily, Archbishop Martin said: Father Charles was an unlikely saint, if we were to judge by our modern criteria of success…. Holiness does not require celebrity; holiness springs from humility. Saint Charles was a humble man who never sought a special place for himself. His ministry was a quiet one, dedicated to the confessional and comforting the sick and the troubled…. We can all learn from the humble way in which Father Charles accompanied countless men and women without seeking anything in return. He was no medical expert, but he touched the hearts of the sick in a very special way. And he was aware of the sinfulness that lies deep in human hearts. Nevertheless, he was not condemnatory, Rather, he mirrored the mercy of Jesus and believed that no one is hopelessly excluded from that mercy.