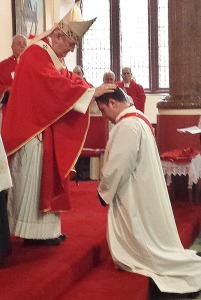 Nearly every day on my way to school at St. Aloysius College, Highgate, from 1957 until 1964, I would detour into St. Joseph’s Retreat, Highgate to say my prayers. Founded by Fr. Ignatius Spencer in the 1850’s, this Passionist church stands on the top of Highgate Hill in London. It is a landmark for the whole of North London, and is affectionately known as “Holy Joe’s” by Catholics and non Catholics alike! Many years later, as a parish priest in the parish next door, whenever I passed St. Joseph’s, I used to think of the motto of the Carthusian Order: “The cross stands still while the world turns”. Frs. Hubert Condron and Christopher Kelly were two great rocks of stability in the turning world of North London.

The Order of the Cross and Passion was founded by St. Paul of the Cross in 1725 as a contemplative and active Congregation. Its purpose was “… to stir up in people an understanding of how the saving work and sacrifice of Jesus on the cross is the key to unlocking the mystery of our own life, death and resurrection”. The cross stands at the crossroads of the human experience in the life of believer and non-believer alike. This is particularly so where we suffer and face the incomprehensible questions of life – and death – all so often described by us as a “waste of time”. There is no getting around the cross, no avoiding it. The only way is to grow through the cross, learning that in suffering, sickness, pain and death God invites us nervously and gently to believe that no time is wasted in which He is served. The service of God is the sanctification of time. And when time weighs heavily on our hands, and we ask “Where is God in the midst of human suffering”, Jesus answers “Here” with arms outstretched on the cross..In the words of Pascal “Jesus will be in agony until the end of the world, we must not sleep during that time”. We must not sleep. We have to engage with the cross.

“The cross stands still while the world turns”. The sign of our terrible human failure and sin, which is the cross, is also the sign that the things of God cannot be abolished. The cross is the sign that evil will never ultimately triumph, that justice will not be extinguished forever, that the voice of the poor and tormented cannot ultimately be silenced. This is because the cross is rooted in what does not change – the passionate love of God made visible in the incarnational life and sacrificial death of Jesus – and beyond. Hanging on the cross, Jesus did not withdraw God’s love from the world. He did not say “I have wasted my time. These people are unforgiveable”. He goes on loving, goes on revealing, goes on forgiving. His words in death express it all: “Father, forgive them, they know not what they do”. (Lk 23:34). No wonder St. Paul of the Cross saw in the Passion of Jesus “..the greatest work of divine love”.

The one who is to be ordained a priest in the Passionist Order is to make known in his life and ministry “…the greatest work of divine love”. In seeking to blend the missionary and contemplative work he reflects the words of Cardinal Basil Hume who said “It is only when we contemplate the cross in our own lives, it is only when we gaze on the cross of Jesus, does the cross yield up its meaning”. And here, Gareth, lies the key to your work for the poor and dispossessed. Those who are at the margins of society, those whose dignity has been taken away sometimes by external circumstances, but just as much by the internal burdens they carry too. The one who preaches the saving work of the cross of Jesus Christ doesn’t just speak about God’s love, doesn’t just bestow charitable care on others, but works from the depths of compassion – cum-passio, suffering with, in solidarity with, in communion with those whom he serves. “We must not sleep during that time. If this were possible, the words of the Institution Narrative must surely have an added significance for the Passionist priest: “This is my Body”.The signs and symbols, which express the deepest truths of ordination, speak powerfully in a wordless way of the priest being conformed to the cross of Jesus Christ. The laying on of hands link you profoundly to the apostolic witness, expressed not least through the laying down by the martyrs of their lives in apostolic times. The priestly stole put upon your shoulders is a reminder of the words of Jesus that “My yoke is easy and my burden is light”. Your hands will be anointed with the sign of the cross, with the oil of Chrism, the oil named after Christ who heals the wounds of the broken hearted. And when you are given the gifts of the people to be offered to God, you are instructed: Know what you are doing. Imitate the mystery you celebrate. Model your life on the mystery of the Lord’s cross.

As a contemplative Passionist priest of the Irish Province, who has engaged in active ministry in Scotland, but remains a true son of Wales, the words of the Welsh poet R. S. Thomas, might well be in your mind on this day. Writing of an empty church he says:
Often, I try
To analyse the quality
Of its silences. Is this where God hides
From my searching? I have stopped to listen,
After the few people have gone,
To the air recomposing itself
For vigil. It has waited like this
Since the stones grouped themselves about it.
These are the hard ribs
Of a body that our prayers have failed
To animate. Shadows advance
From their corners to take possession
Of places the light heldFor an hour. The uneasiness of the pews
Ceases. There is no other sound
In the darkness but the sound of a man
Breathing, testing his faith
On emptiness, nailing his questions
One by one to an untenanted cross.

The contemplative and active life of the Passionist priest. The cross standing still whilst the world turns. Only when we contemplate the cross will it yield up its meaning.